A Front Row Seat for the Cultural Revolution: Trouble In T’ien An Men Square (Part 2) 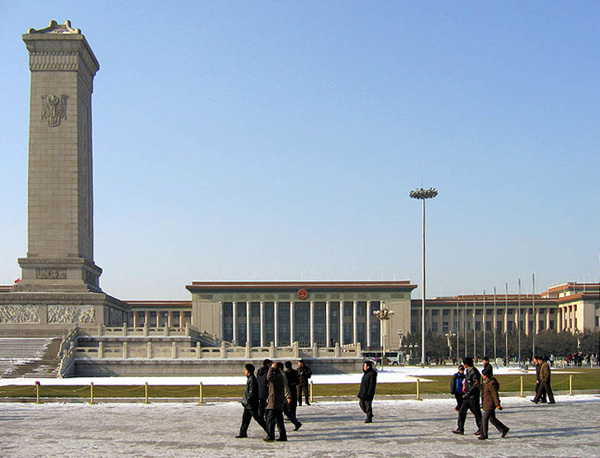 Monument to the People’s Heroes and the Great Hall of the People. 12/26/2004. By Jacob Ehnmark, via Wikimedia Commons

While I’d been waiting for my box to be built earlier in this production, I’d been able to look outside through a window to the small back street below. There were rows of bicycle rickshaws waiting for Chinese customers. No way would we have been allowed to ride in one of them. The Communists would have considered this an example of westerners exploiting the poor Chinese, treating them like beasts of burden as they pedaled the westerners through the streets of Peking.

I’d also noticed a small side entrance through which people entered and left. So, when I finished, sure that my taxi/spy/driver was still lurking somewhere out front, I slipped out the side door.

I knew that I was somewhere in back of T’ien an men Square, the largest square in the world, and it wasn’t hard to find. This is one gigantic open area as the world now knows from the massacre films. Being totally on my own for once I was overcome with the feeling of exhilaration. The big Russian style buildings on three sides of the square weren’t of particular interest to me. The Monument to the People’s Heroes, a tall square granite obelisk on a raised platform right in the center of the square was more interesting. As with almost everything in China, there was a quote from Chairman Mao on the monument. I found out later that this quote, engraved into the marble in Chinese characters, translated in English to “The People’s Heroes Will be Remembered Eternally”. And carved into the base were relief depictions of historical events, starting only with the mid-nineteenth century Opium War. The highest section of that raised platform looked like a good place to take photographs so that’s where I headed.

As I found my spot and got the camera out, in the distance buses pulled up in front of the National People’s Congress Building and masses of young people piled out, unfurling big red flags as they went. They fell into formation and started going through elaborate routines with their red flags. This was a great photo op! Or so I thought as I snapped away, until I saw through my lens a frighteningly large group of young people wearing red neck scarves quickly and menacingly coming directly towards me.

I was frightened! No one knew where I was and there were so many of them coming at me. I had no idea what I had done to prompt this action. But I obviously was their target. Then just as suddenly as they started towards me, they reversed their direction and quickly returned to their training area. I had no idea what had intervened, but I was deeply grateful for their change of plan.

To be safe I moved down slowly and started taking lots of photos of some very cute colorfully dressed children near the monument. I wanted to appear innocent. I was innocent! And children were always an accepted photo choice. 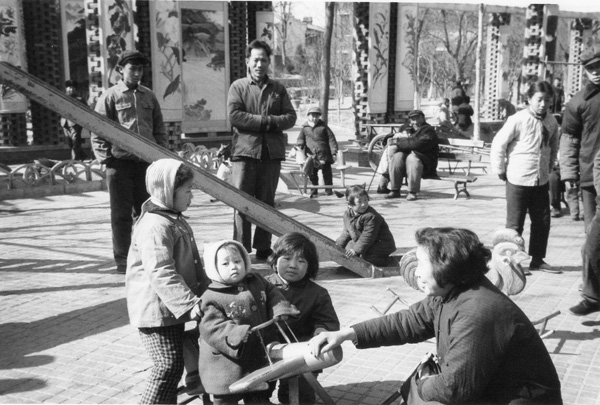 I worked my way casually across the gigantic square, shooting pictures of children all along my route (all the while knowing I’d run out of film some photos before) heading towards the Gate of Heavenly Peace which is across from the square on the other side of An Chieh highway.

Having had enough independence for the day I walked on past the entrance to the old Imperial City and the site from which Mao Tse-tung proclaimed the People’s Republic of China back to our hotel. The taxi driver wasn’t there waiting for me as I’d thought he might be. No one was looking for me. In fact, it wasn’t until several weeks later that I figured out why no one was searching and why the angry Red Guards had had done such a quick retreat.

I found the answer while sitting in my Santa Barbara living room viewing the colored slides of my China trip that I’d just picked up from the photo shop several weeks after my return from China. In several of the photos I noticed a plain looking man in blue Mao suit and cap was walking across the square, directly towards where I had been standing. He had his hands behind his back and appeared to be out for a casual stroll. But in one photo he was turned towards the advancing Red Guard gang and one hand was raised. Obviously the taxi driver had returned to the hotel and reported me out on my own and party cadres had taken off quickly to find me. The older cadres were well aware of the violence towards westerners the young Red Guard were capable of, which was one major reason we were watched constantly while we were in China. The Communist Party government was most concerned that no negative incidents involving the visiting westerners take place. Belatedly I was most jubilant this time they had infringed upon my independence.

My alarming encounter with the Red Guard in T’ien an men Square in 1975 came particularly alive to me years later when on June 4th, 1989 I watched on TV as a lone young patriot faced down a gigantic military tank, one of many the Communist Party leadership had ordered into T’ien an men square to crush an unprecedented democratic peaceful protest. I watched the brave young women and men falling like toy soldiers in their battle with the well trained heavily armed army troops in what has come to be known as the Massacre of T’ien an men Square. The old men in power were tremendously frightened by the young students who yearned for democracy in China and gave orders to stop them at any cost.

At Least You Couldn't Buy His Underwear
Are your Penguins Warmly Dressed in Case of an Oil Spill?
A Front Row Seat for the Cultural Revolution: The Bug In The Light Fixture Couldn’t Fly
Categories Books, My Life
Comments (1)