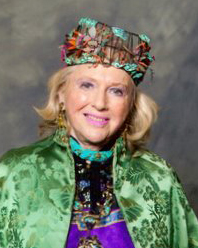 Born in Los Angeles, an inveterate traveler, I ultimately moved to Santa Barbara, California, in 1963. My writing life began with a people column I wrote for the Santa Barbara News-Press for 22 years. In 1975, an unexpected trip to China during the Cultural Revolution with Jayne Meadows and Steve Allen totally changed my life.

One dark night in Shanghai, when my traveling companions were ill, there was nothing to do. We weren’t allowed to take any reading material into China. No TV. I was wandering the halls of the Peace Hotel, studying the Art Deco elevator doors, the sconces, the radiator covers, totally bored, when a tiny waiter who spoke a bit of English whispered, “Go shopping…they open the friendship store for Polish sailors who sail tomorrow.” So I took my flashlight (no cars were on roads then, so there were no lights at all anywhere) walked the five blocks, and ended up buying a lovely 19th-century Chinese women’s robe.

That first robe led to building one of the major collections of antique Chinese clothing in United States. Researching this collection for lectures on life in 18th- and 19th-century China (which I’ve delivered in many museums in the United States, Hong Kong, Singapore, and China) led to my writing five nonfiction books. Now I’m doing something very adventuresome for an 82-year old. I’ve just self-published my first novel, “The Beautiful Lady was a Palace Eunuch.”