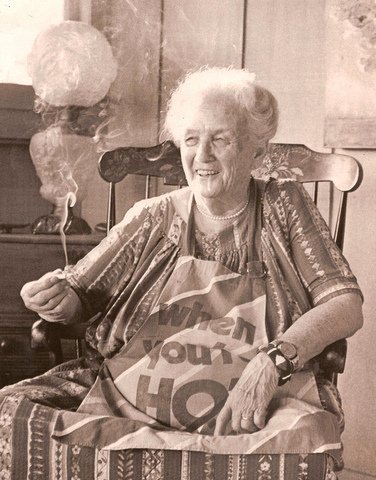 This photo of beloved Ollie Carey is one of my favorite photos of all the thousands I have taken in my life.

I certainly moved to Santa Barbara just in time — just in time for some fabulous people who will never be equaled again.  Just in time to see how life was enjoyed in the grand old Montecito mansions fully staffed from butler to chef.  My favorite people were all much older than I.  They’d lived lives that could never be duplicated in today’s messed up world.  They lived life to the fullest but had human compassion.  And they generously took a new young divorcee into their open arms and shared their world and affection with her.  And I truly loved them in return.

At the top of my list is a woman who when I knew her lived in a tiny pink house covered with vines and surrounded by ever blooming hibiscus trees on a big ranch, many thousand acres, in Carpentaria, California.  During an earlier stage of her life she’d lived in the late Rudolph Valentino’s famed mansion Falcon’s Lair.   Vast avocado orchards and lemon groves surrounded the little pink house.  And close by a huge reservoir that saved the many small ranch houses on the property and the fabulous lemon packing plant that had been converted into the chicest home filled with Tamayo paintings and great taste by ranch owner Irma Kellogg when a horrendous forest fire consumed the mountains behind and around it.  There’s another blog coming on that fire as I was at a party at painter Jack Baker’s house and studio on the ranch when the phone call came from the fire department the wildfire had broken the fire line at the mountain ridge and was racing down the hill.  “Get out fast!” was the order. 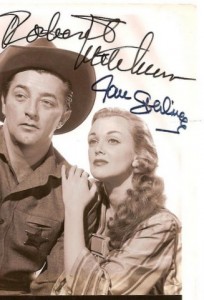 Dorothy and Bob Mitchum were always at Ollie’s birthday parties. And Jan Sterling who lived for many years in London was there whenever she was in USA during the summer.

Irma had it in her legal documents that when the ranch was sold Ollie Carey would have her little pink house the rest of her life for $50 a month.  And that’s where she lived out her life.  And what a life it had been.  When I knew her the world came to her.  I’d drop in and find Richard Widmark or John Wayne or one of her many buddies from the past spread out in a big comfortable chair remembering the past with Ollie. And maybe drinking with her.  Ollie could drink with the best of them and did.  And generally had a cigarette burning. For her birthday each year Senator Barry Goldwater, wife Peggy and the whole family piled into RVs and drove over from Arizona to host Ollie’s birthday party, bringing all the provisions with them.  The party was held in a forest like area on the ranch and everyone was there from the ranch hands to the big Hollywood stars to baseball’s pitching great Sandy Koufax who would come with his in-laws Dick and Jeanne Widmark and wife Anne. Robert Mitchum, John Ireland, Stuart Whitman, Jane Russell, Dame Judith Anderson, and Mel Ferrer and Audrey Hepburn (when she was married to him) were all regulars. 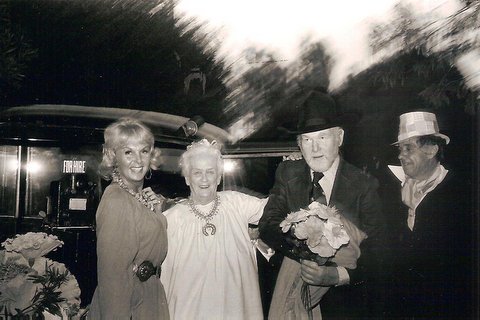 I got to know Ollie very well when she asked me to help her write her autobiography.  I’d head down to the little pink house, taking lunch with me for the two of us, and we’d work and laugh.  Oh how Ollie could throw back her head and belt out laughter.  It was wonderful  We actually came up with a good book I thought.  But we got turned down several times (what else is new for most authors!) and Ollie said, “To hell with it.”  She had one copy I think she tore up and I had one and it’s somewhere in the masses of papers stored in my garage and I have to find it I promise! 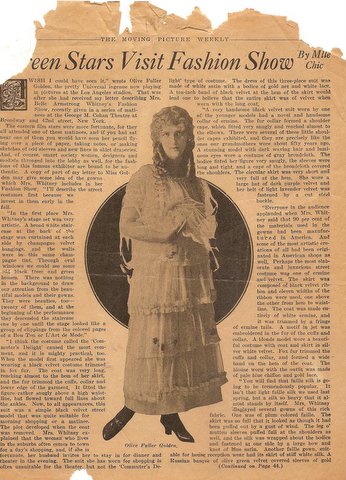 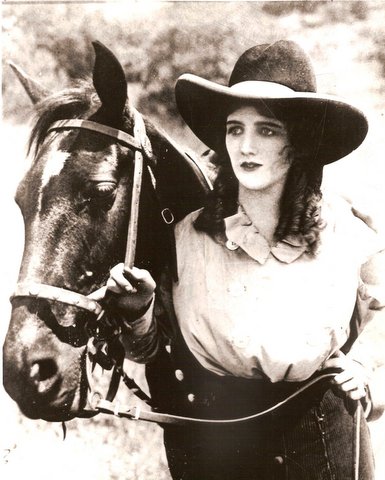 A publicity shot of Ollie in one of her early films

Ollie was born in New York City but she headed west to Hollywood at a very young age.  She told me that she was only 17 years old when she started living with the much older cowboy star Harry Carey.  Well, Harry was more than a cowboy star although that’s how he was known.  The son of a New York City judge and president of a sewing machine company, Harry was also a railway superintendent, author, lawyer and playwright.  And he had three years touring with a circus too!  Harry must have been quite a character.  Some of his escapades we had in Ollie’s book!!!! 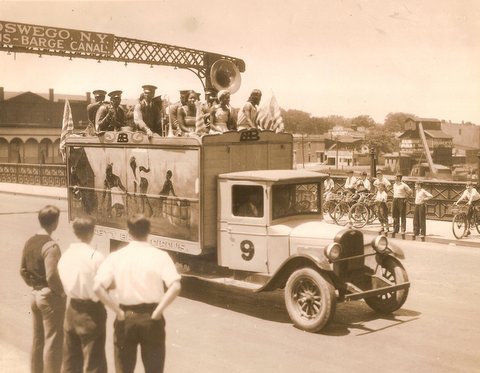 The Barnett Bros Circus wagon photographed in the 1920s when Harry Carey was working with the circus. 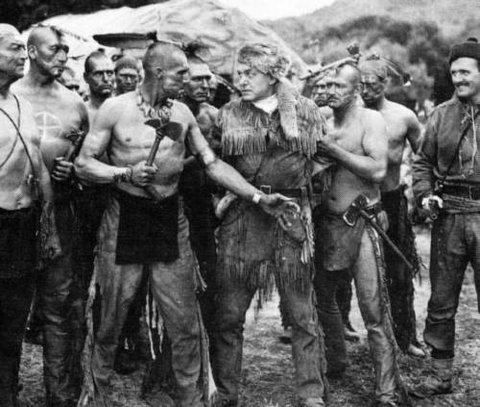 Harry Carey starred in The Last of the Mohicans in 1934

Ollie and Harry lived on a ranch in San Francisquitao Canyon about 35 miles from Los Angeles.  It was the Saugus area where cowboy movies were shot in those days.  The ranch was big, about 1,200 acres, and they had a large group of Navajo Indians who lived and worked on the property and managed large herds of Navajo and Karakul sheep that grazed on the slopes of the mountains.  And they had a trading post store on the property.  Ollie would describe the Navajo religious ceremonies that took place on the ranch.  And speaking of living on the ranch, director John Ford and actor John Wayne lived there too sleeping in sleeping bags out front of the house joined by Ollie and Harry after a fire that started in the pump house destroyed the original wood frame farm house.  With their films shooting in that area it was practical and fun for sure to live with Ollie and Harry! 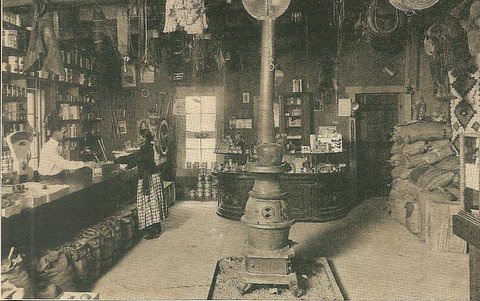 Interior of trading store Ollie and Harry had in Saugus, California run by the Navajos who lived and worked on their ranch.

Harry was Ollie’s life.  She talked about Harry who died in 1947 to the day she died at 92 in 1988.  But she herself appeared in more than 50 films.  Her first was The Sorrowful Shore in 1913.  And now that all the people involved are gone I can tell an interesting story that proved how people loved Ollie.  I helped her with her mail etc. while we were working on the book since I was there almost daily.  I did notice that she lived basically on a check from the Motion Picture Home that always came the first of the month.  I would have expected it to come from Screen Actor’s Guild or something but not the Home.  But I never questioned it.  Some years after she had died I discovered a secret about that check and an interesting woman, Alice Irving.  We all knew Alice Irving who was quiet and shy.  She came from the East and had built a very modern home filled with a major contemporary art collection in Montecito.  I first knew her through volunteer work we both did at the Santa Barbara Museum of Art.  Alice Irving (her two names were usually spoken like one word) wore simple cotton dresses and sturdy shoes and gave no sign of the great wealth that was hers.  Well except for special events at the museum she might have a couple of  fantastic emeralds on her fingers perking up those cotton dresses with little collars and cuffs.  That was her idea of dressing up.  But about the secret I learned.  It seems she had given a large sum of money to the Motion Picture Home, part of it a donation to the Home and the remainder to be paid monthly to Olive Carey for the rest of her life with the understanding Ollie must always think it was from royalties for the films she made.  Ollie never suspected.  She really thought it was royalties for her films.  Alice Irving was a great lady of the old school.  Charity was done without notoriety.  It was done quietly from the heart.

Speaking of Ollie’s financial situation, one other envelope came the first of every month from famed film star Richard Widmark from wherever he was in the world.  In it was always a funny card and a hundred dollar bill and a comment like, “You probably need a new bra you old broad!” (Ollie never wore one) or “Bet you’re out of beer!”   And Ollie would throw back her head and roar with laughter and say something like, “I love that guy!”  And that guy and all of us really loved Ollie!

Click here to cancel reply.
« Leopards Aren’t Just In The Jungle Any More
Entertaining Can be Entertaining for the Hosts Too »