But I Didn’t Know Gable

Hello to all! Fluffy here saying goodbye for now. Mom’s doing so much better. That leg she couldn’t move up at all after a fall she can now raise six inches and going up steadily. Eric Smith, who does her physical therapy, is quite proud of her. So now I’m ready to turn the blog back to mom. I’m flying off to get some of my turkey friends hidden before Thanksgiving. They are the ones who need help now, so here’s the mike back to Mom… 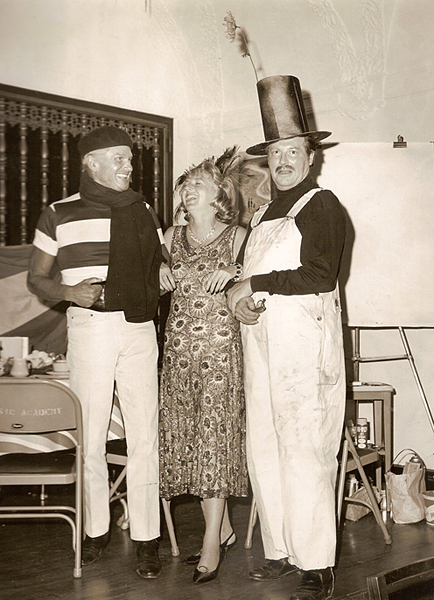 Beaux Arts Ball, 1964. I’m chairman and having a ball with the late Duke Sedgwick (Edie’s father) and the late artist Don Freeman (in the high hat).

You’re a hard act to follow Fluffy and your many friends around the world will miss you. I’m glad you mentioned Eric as he is doing wonders for me. But he worked me so hard yesterday I collapsed on the bed and watched a series of old Ava Gardner films on TCM. What amazed me was how many of her leading men I knew! Fifty Five Days at Peking of course was of great interest to me. I was impressed with how accurate the costuming and sets were. My old friend the late John Ireland (he and wife Daphne lived in Santa Barbara for years and she still does) had a big role in the film. And while the star of the film, Charleton Heston, was very good I cannot bring myself to say so because although he played Moses and headed the NRA, which impressed the gun lovers of the world, and looked upon himself as God I know a secret of his that few people in the world have had a clue. Even the National Enquirer missed it. And TMZ you too! But since it involved a fine actress and dear friend whom I deeply admired and her son I’ve kept it totally to myself for I guess 40 years. But since now both she and her grown son are now gone, I’m sharing this much.

Seven Days in May co-starred my close friend and wonderful actor Kirk Douglas. Kirk and his great wife Anne, my friends of many years, have had a Santa Barbara home for such a long time. Fredric March played the president of the USA in this film. His widow Florence Eldridge, who had been a big star on Broadway, lived her last years in Montecito next door to me in the most elegant condo this side of Park Avenue New York. She had superb taste — and a lovely collection of Impressionist paintings. Florence had few friends in town so she would spend her holidays with my daughter Tracey and me.

An Ava Gardner film I’d never before seen was The Bribe. Her co-star in this was gorgeous Robert Taylor. Since it took place in a steamy hot Caribbean Island, opening scenes looked like Cartagena, a town I adore. Taylor wore perfectly fitted white linen suits throughout, and real Panama hats which of course come from Ecuador. He looked heavenly!!! My memories of him go back to days when Tracey was about two and we were regulars for lunch at the Brentwood Country Mart in Los Angeles area. There was an unofficial table for us regulars and Robert Taylor was one of us. I’d leave Tracey with him while I went off to get my iced coffee and carrot juice for her, she still hates the stuff, and the divine movie star got sprayed more than once when she spit the carrot juice out. He only laughed and agreed with her. But imagine having Robert Taylor baby sit all the time. Vincent Price was the bad guy in the film and I was reminded of the time in 1964 when he and George Hamilton kindly accepted my invitation to judge the costumes at a Beaux Arts Ball I chaired as a fundraiser for the Art Affiliates of UCSB. Liddy Paulding, the ancient society columnist at the Santa Barbara News-Press for over 40 years, said it was the best party she’d seen in those years. It was held at the old Bliss mansion, now the popular retirement home Casa Dorinda. Ms. Bliss who built the great house, was the daughter of man who invented the very popular patent medicine Castoria. The house was known for having a long bridge on the second floor that Mr. Bliss had to cross to get to Mrs. Bliss’ bedroom. And I’ve been told that door on her side was seldom unlocked.