A Front Row Seat for the Cultural Revolution: Near Tragedy In The Hotel Dining Room

Chapter Eight
NEAR TRAGEDY IN THE HOTEL DINING ROOM
Part One 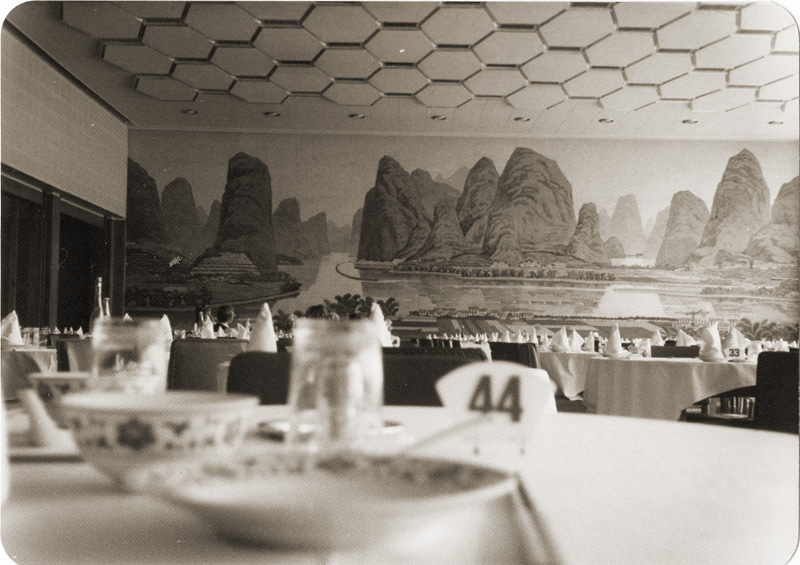 We ate most of our meals in that big hotel dining room, staring at the Quilin scene created with mosaic tiles on the back wall. The same round table covered in white cloth, with fresh white cotton napkins, awaited us morning, noon and night. The same sweet elderly waiter who spoke very good English was with us three meals a day. Our room numbers were displayed quite boldly on the table. And as in Tientsin, certain private supplies were found on various tables around us. On one sat catsup and a bottle of Chinese wine. The level went down faster than an inch a day on the wine. We assumed it was a British group who shared the marmalade, bottle of Scotch and a bag from Lyons Coffee Company on another table. One table featured Johnny Walker Black label and on another was a jar of Maxwell House instant coffee and some powdered milk.

Most of our group took advantage of English breakfasts that were available. I leaned towards the Chinese, being very fond of congee (a sort of cereal made of rice that has been boiled down to the consistency of cream of wheat and eaten with slices of meat or chicken, or bits or vegetables — or just plain). However, in Tientsin I’d discovered I could get their delicious rice pudding for breakfast. Rice pudding and orange pop for daily breakfast. It’s a menu I haven’t tried to duplicate since that trip.

In Peking I was to discover caviar for breakfast. Russian caviar was available by the plateful for about thirty cents a plate and that was a dinner size plate. In fact you could get this very fine caviar any meal you wished as a “side dish”. So with a change in city there was a change in breakfast. I now enjoyed congee with pickled vegetable, good Russian caviar (lots of it), freshly made yoghurt which the Chinese did very well, again the Russian influence I assumed. Oh yes, and tea. Tea was so much better than the powdered coffee many of our group had brought from home. One member of our group had brought what appeared to be a lifetime supply of peanut butter and basically lived on that the 10 days she stayed in China.

When our Danish friend Peter had left us in Tientsin, he’d given me a lovely gift. We had become good friends because everyone else, except Rosa who frequently disappeared with no warning or explanation, was in pairs. Peter, being a Dane instead of an American, had been allowed to bring a book with him. Actually he had been in Peking many times before as he bought carpets for the largest department store in Copenhagen. We as Americans without full diplomatic relations with China had been forbidden to bring any books, newspapers, or magazines with us.

The book that Peter gave me was a 1936 copy of In Search Of Old Peking by L. C. Arlington and William Lewisohn. This book has proven to be a true treasure to me. It has through the years allowed me to trace long lost monuments, legendary ancient trees and many other forgotten remains of the past in the outskirts of Peking and the Western Hills. A patient guide and I once spent a long day trying to locate the old French Jesuit cemetery where famous Jesuit missionaries were buried and most importantly the Ancestral Hall and compound gifted to the King of the Eunuchs Kang T’ieh, known as Kang Ping, by Emperor Yung Lo. The directions weren’t very good since they said things like “take the dirt road through the village of….. “ which of course now was a super highway through masses of ten story apartment buildings. Peking had spread out and modernized since those days. But my driver and guide approached every elderly person in sight in the general area the guide book described and ultimately they got information that led us to the remains I sought. Most of the buildings were gone, but on this pathetic remnant of the past we located I found traces of red lacquer that once covered the pillars in its days of splendor and hidden parts of imperial yellow tiles, another honor the emperor had bestowed upon Kang (allowing him to use imperial yellow tiles on his roof — something previously only allowed the emperor).

The reason Kang Ping was awarded such honors by the emperor is most unusual. Kang Ping, the most important eunuch in Chinese history, was originally army general Kang Ping who served the emperor Yung Lo. On one occasion when the emperor went off on a hunting trip he left Kang Ping in charge of the palace. Kang was deeply grateful for the trust the emperor placed in him, but was very afraid of his enemies at court. They were not above making up stories such as that he had become involved with one of the court ladies in the emperor’s absence. To prevent this, he castrated himself, and hid the parts he removed in the hollow of the saddle on which the emperor would be riding. Just as he feared, upon Yung Lo’s return one of the ministers did tell him that General Kang had behaved badly with one of the imperial ladies. In reply to the emperor, Kang explained he had made a eunuch of himself before the departure and asked the emperor to send for his saddle.

The emperor could not believe such loyalty and awarded Kang with great honors and made him Chief Eunuch. He also built a gigantic compound and ancestral hall in Kang’s honor where retired eunuchs went to live and a burial grounds for eunuchs in the western hills. The imperial family continued to finance this area until the end of the dynasty in 1911. …to be continued