A Front Row Seat for the Cultural Revolution: The Legendary Capital Of China

Once the fair ended we all boarded a night train to Peking, a hard-back night train.  This meant we sat on once-polished uncomfortable wooden seats in an unheated dimly lighted railroad car.  We had departed with a royal sendoff from our Tientsin Hotel.  Everyone who’d served us, spied on us, had any sort of seen or unseen contact with us, was there to wave goodbye.  Comrade Sung stayed with us all the way to the train.  I think he’d grown to like us.  He’d enjoyed the mental challenge of trying to outwit us in his nightly inquisitions, finding himself against commensurate minds.  He stood on the platform waving goodbye until totally veiled in steam and darkness.  The composure Sung displayed at the end led our cynical minds to presume all the completed resumes, the results of his endless hours of questioning and spying, had been deemed satisfactory by his superiors and were now in the hands of the proper authorities in Peking.  Peking was now well informed and prepared for our arrival. 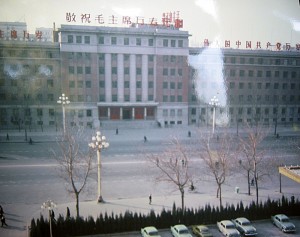 Traffic on main street in Peking looked like this in 1975. Today it is bumper to bumper.

Our railroad car was filled with young soldiers in thin green cotton uniforms with red lapels and red stars on their hats. Their belongings spilled over the netting overhead racks.  They had packages, probably sent along by mothers or wives, wrapped in reed matting, khaki color bags, enamel pans filled with fruit and garlic (pans to be used for bathing later), burlap bags with hidden necessities, and string bags with indiscernible contents.  And soldier had a rifle casually tossed up there as well.

Somehow Steve Allen and I got separated from the rest of our gang.  There wasn’t anyone else in our car except the soldiers and the two of us.  There were no railroad attendants or guards.  This fact, coupled with all those rifles, didn’t exactly create a “sit back and let us do the driving” sort of happy traveler. Trying not to dwell on those rifles I concentrated on how each young man could carry so many diverse items in those string bags.  Among items I could make out were an enamel drinking cup, tooth brush and tooth paste, changes of shirts and underwear, books, and bags of sweets.  When we arrived at the end of our trip and bamboo poles were retrieved from beneath all the bundles I was fascinated to watch as everything was carried off most easily dangling from the two ends of the bamboo poles, just as the Chinese have transported everything from night soil to gold ore for centuries.

Steve and I were cold in that barren railroad car even though we were enveloped in camels’ hair, cashmere and fur.  The young soldiers conversely appeared quite comfortable in their light weight padded cotton uniforms.  One young soldier a couple of rows in front and across the aisle from us kept looking back at Steve and me rather menacingly.  Thinking of those rifles overhead this made us quite uncomfortable.  Then about an hour out of Tientsin, after watching us continuously, he stood up and reached into the rack above his head.  I was holding my breath and Steve definitely wasn’t cracking any jokes.  To my relief the soldier’s hands passed right over his rifle.  He unzipped his canvas bag and rummaged inside, just long enough for my imagination to conjure up secreted Central American machetes and Middle Eastern daggers.  But what he pulled out was one of the colorful big green thermoses decorated with floral decals that had become part of our daily Tientsin survival.  He carefully poured some of the hot tea into the thermos lid, not easy on a train moving rapidly over tracks that appeared to have been laid about the same time the Great Wall was being built in the north.  Slowly he walked across the aisle and handed the cup to Steve, indicating with his free hand that Steve and I were to share the cup of steaming liquid.  Our shivering smiles must have been an adequate reward for his sympathetic kindness to two enemy strangers.  It was a beautiful example of human kindness and I felt quite ashamed for having been suspicious of the young soldier’s intentions.

Thoroughly warmed inside by both the hot liquid and the warm gesture, Steve and I settled into relaxed conversation.  This noisy train couldn’t be bugged.   He told me about a train poem he’d written that is included in an English book of famous train poems when he was young.  Unfortunately the name of the book is now forgotten.  We talked about family and friends, our cameras and the types of film we’d brought.  We felt safe, but not safe enough to talk about China.

The seats were so uncomfortable and we couldn’t see much outside the window.  Soft moonlight and steam drifting back from our old fashioned steam engine created strange silhouettes of the bare trees and darkened villages.

Our bodies were cold and sore at the end of the several hour ride.  Stiffened fingers were slow gathering up our gear.  The young soldiers in their padded cotton uniforms however had no problems pulling down their carry-ons, looping the handles over either end of their bamboo poles and trotting off into the cavernous Peking train station.  Possibly it was enthusiasm that motivated their rapid departure.  The majority of these young peasant recruits had never been to a city before.

The Peking Train Station was a product of Mao’s Great Leap Forward architecture, built in 1958.  It was big and cold and unwelcoming, the ceilings outlandishly high to make individuals feel small and insignificant.  Tall pillars of granite, marble balustrades, long escalators and huge paintings broke the space.

One tremendous painting portrayed a paternal young Chairman Mao on a grassy hilltop, leading smiling happy peasants and minority people waving flags, rifles, picks.  And charging up the hill towards them ran happy recruits coming to join the revolutionary forces.  It was a sort of “Uncle Sam Wants You!” recruiting poster Chinese style.  And there were the ever-present, very big, always smiling portraits of Chairman Mao.

Like Gulliver’s Travels, tiny people hovered beneath the benevolently smiling giant.  Khaki-clad soldiers sprawled over their rope-tied cloth  bags and reed bales of gear, peasants trotted past with treasured belongings suspended from shoulder balanced bamboo poles, wrinkled old women in quilted black silk jackets, black pants, black velvet turbans touched with a bit of jade and tiny black slippers on their bound feet reclined on their bags of belongings.  Enchanting tiny children so bundled up in quilted clothing they looked like toddling Russian tea cozies clung to parents.  Their little bare derrieres were exposed through slits in the back of their trousers, a Chinese provision for potty training.  These and a sea of indistinguishable blue quilted Mao coats and caps with people inside filled the gigantic station waiting room.

This was our first real sample of the magnitude of the masses of people who could assemble in any one place in China.  As Americans we couldn’t really imagine such numbers all crushed together.  There could be no comparison to record crowds in their orderly rows of seats at a Super Bowl.  There each one still retained their individuality. — To be continued…