A Front Row Seat for the Cultural Revolution: And So the Adventure Begins (Part 2)

Chapter One
AND SO THE ADVENTURE BEGINS
Part Two

My flight to China took over 24 hours. We ran into a heavy snow storm that put us down in Anchorage, and kept us there until record snowfall abated in Tokyo. My plane seatmate was a U.S. military man who, during his temporary leave in the States, had been dramatically reunited with his wife on the popular “Truth or Consequences” TV show. The next day she told him she was divorcing him!

Two of our party, Helene Pollack and Herb Cole, had been told by their U.S. doctors that they wouldn’t need smallpox vaccination certificates. Immediately upon arrival in Hong Kong they were rushed into an office at the Airport. Helene came out rubbing her arm, clutching an official white form. Herb came out looking distraught. He didn’t get a shot because he still had a scab from his U. S. vaccination. But the nurse couldn’t give him a form like Helene’s. I suggested we adjust our itinerary to allow an extra half hour at every port of embarkation and debarkation for Herb’s vaccinations. He didn’t find me amusing.

Torrie Levy had her own crisis to cope with. Her hairdryer broke the first morning in Hong Kong and she didn’t want to continue the trip. She’d already lost her glasses on the plane from Los Angeles. Her mother Marge Levy had lived through 30 years of these crises with Torrie and carried on unconcerned.

The two days in Hong Kong involved a lot of trips to China Travel Agency to get the endless documents required. And we all spent a good part of the last night making sure our customs declarations were accurate to the last U. S. penny or dime that might be found in a pocket or bottom of a purse. We’d been forcefully warned that there was no fooling around with money declarations going in or coming out of China. Pennies and dimes mattered to the precise Chinese.

And so, when that big old puffing steam engine pulled us as close to the border as it could go, we were ready for the short walk across the wooden bridge into the People’s Republic of China where the bright red flags were waving and Chairman Mao was smiling at us from a big gaudy painting.

Lugging carry-on bags, camera cases, coats and purse, I walked excitedly across the short bridge into the People’s Republic of China. Well, I didn’t exactly walk in. I fell in. There was a small step as I walked off the bridge that was invisible beneath all the things I was carrying and down I went. 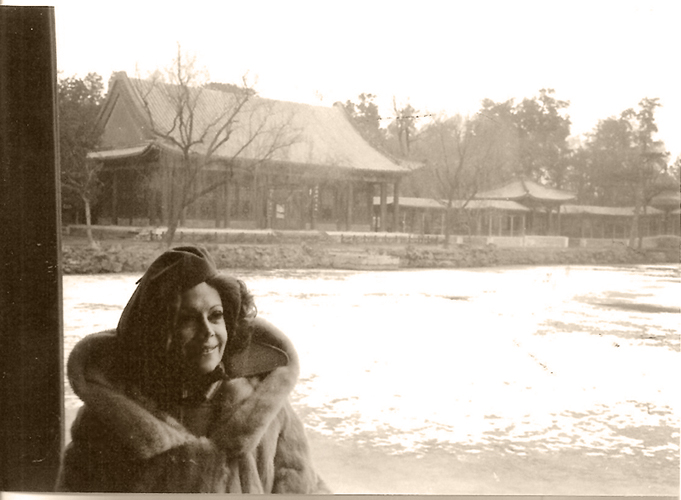 Jayne Meadows next to a frozen lake at the Summer Palace

The customs people were smiling and cooperative, not at all what we’d been led to anticipate. Well, they were smiling and cooperative until they got to Rosa and Jayne. Jayne’s passport and visa photos had been taken without her red wig and she wasn’t getting into the People’s Republic of China without removing the wig she was wearing. However, Rosa was the real problem. Since we’d been helping her carry them we were aware that she was entering the People’s Republic of China with 11 suitcases and some extra boxes and bags. What we didn’t realize was she was bringing not only clothes for her family but TV sets, bathroom scales, meat grinders, and more. The customs officials were not happy with Rosa’s baggage and we seemed in for an endless delay. We’ll never know if her persistence wore them down, they just wanted her out of there, or Rosa said some magical name or words, but we were suddenly and most unexpectedly waved on.

An hour and a half later, after much tea served in tall quaintly decorated enamel cups with lids, and a good lunch of assorted dishes of stir fried vegetables, pork, chunks of deep fried fish, and rice we exited the way we’d entered. We had to catch a train to Canton. In Canton we’d catch the plane to Peking where we’d take a train to Tientsin, which is where we were actually going. Nobody had ever suggested that this trip would be easy. Approaching the memorable step of my entrance, we encountered four uniformed men on either side of the step. They were stationed there to direct our attention to the step. Their outstretched arms, all 16 of them, pointed directly towards that one small step. Foreigners didn’t often make the same mistake twice during the Cultural Revolution in China.

The train to Canton was clean and air conditioned. We were now passing through a tropical area, not unfamiliar to my Santa Barbara eye. Lush green foliage and crops, flowers, banana trees, house roofs of red tile. The Canton train station was a marvel of high ceilinged, Leningrad influenced, Art Nouveau. The vast waiting room, filled with eggplant colored imitation leather sofas, had marvelous etched glass windows. Glass curtains of lace with bamboo design stretched the length of the two story tall exterior windows. But we didn’t linger here. We were moved on to the airport and another waiting room and more tea. We drank a lot of tea in dining or waiting rooms before we finally got to Tientsin. The dining rooms all had wash basins near the door. Waiting rooms were decorated with small tangerine trees covered with tiny fruit in pots and lots of big red propaganda banners hanging everywhere.

And so ends the first chapter of “A Front Row Seat for the Cultural Revolution.” In a few days we start Chapter Two. You don’t want to miss it!