A Front Row Seat for the Cultural Revolution: We Had the Great Wall To Ourselves

Chapter Six
WE HAD THE GREAT WALL TO OURSELVES
Part One

The Great Wall was the last thing the astronauts saw from space, and the first thing our gang of ten wanted to see in China.  The road out of town was lined with newly planted rows of bare trees.  A few bicycles, trucks and horse drawn carts carrying hay speckled the long straight route.  We bounced past deep excavations for a new part of the Peking subway.  I heard about the subway but was never allowed to see it.  Rumors were that it was truly an entire city underground to be used in case of attack.  This tied into the rumors that the football field wide street upon which our hotel was located had been built to tremendous width to allow war planes to use it as a runway in case of trouble. 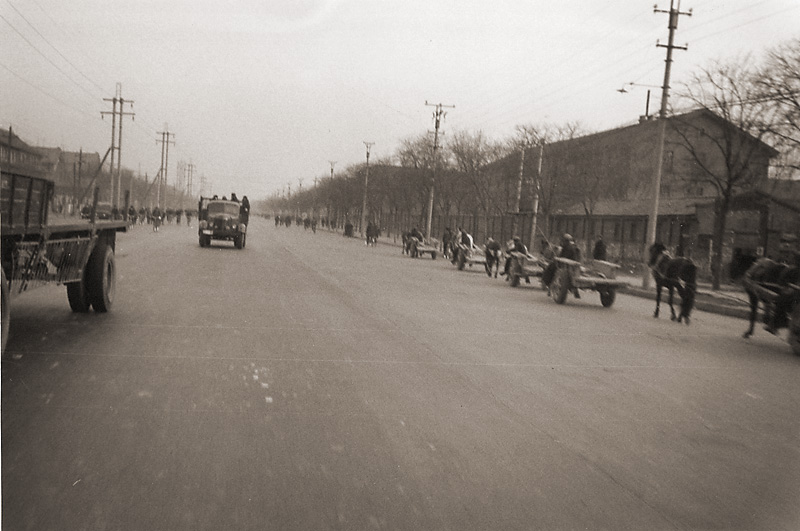 Heavy traffic on a Main Street in China during Cultural Revolution.

A cement mountain and dilapidated mining equipment appeared in the distance.  We passed factories, the brick walls surrounding them topped with jagged pieces of glass sticking into the mortar.  The glass sparkled quite innocently, quite prettily, in the light that filtered through the smoke and fine dust floating trough the resultant smog.  Was it to keep people out, or in?  We’d been lectured daily that since the revolution China was free of crime.

On this long drive we saw one of the only two gas stations we found in China — two bright red pumps at the side of the road.  The other one was near the International Club in the foreign legation area.

A Hollywood spectacle suddenly sped past our lumbering bus.  It was a fleet of black limousines.  What a surprising sight. No one would tell us who it was.  However, the flag of the Congo was flying out front of our hotel that day in honor of the visiting president of the Congo, so it was a safe guess that we’d just been left in the dust of his entourage.

We’d been driving a long time when the rest room stop was made.  Now none of us were expecting a sparkling clean Chevron station.  But the wooden shed where a long splintery plank with four holes set over four deep foul-smelling holes in the earth did come as a surprise.  We were instructed that time was limited so four of us had to go at a time, or as numbers worked out with only members of the same sex participating at one time.  What did we do?  We hiked up our mink and broadtail coats, unzipped our trousers, pulled them down and climbed aboard.  What a photograph that would have made.

Hygienics were attended to with good old American Kleenex and those antiseptic pads called “Wash & Dries”.  Our purses and pockets were filled the little sealed packets of them at all times.  Returning to the heated bus after our freezing bathroom adventure, conversation turned to the penetrating cold the Chinese were enduring in their padded cotton jackets and Mao suits as a chilling wind blew off the Gobi Desert.

“When I was a little girl in China,” Jayne explained, “my mother would ask the servants how cold it was outside.  They would reply that it was a two coat day or a three coat day.” This day Jayne was obviously dressed for three coat weather wearing red and white striped long underwear, a plaid suit with silk blouse and two sweaters under it, her ankle length camel hair coat under her hooded camel color mink coat.  And of course gloves, boots, scarf and beret. —to be continued.

By The Way
On Display in the Front Windows
A Front Row Seat for the Cultural Revolution: I Want to Go to Shanghai
Categories Books, My Life
Comments (0)