A Front Row Seat for the Cultural Revolution:We Had The Great Wall To Ourselves (Part 3)

Chapter Six
WE HAD THE GREAT WALL TO OURSELVES
Part Three 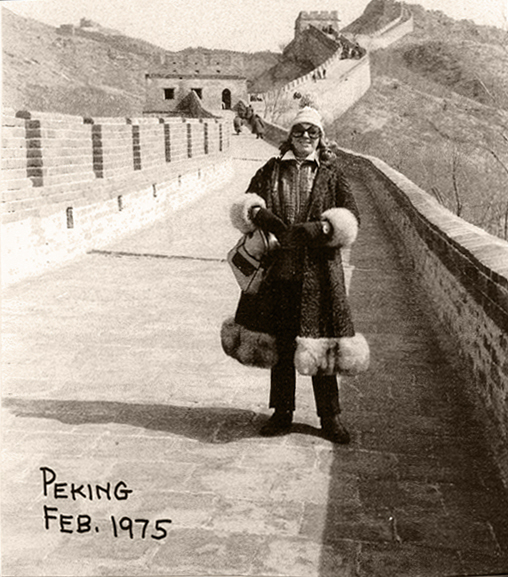 Beverley Jackson on the Great Wall of China, 1975.

The tombs of 13 Ming emperors are North West of Peking, at the foot of T’ien-shou Hill where the low mountains overlook the flatlands. A great deal of modern construction had taken place around the tomb that was opened to the public. In 1975 only one tomb had been excavated. We toured that tomb, deep under the ground, and visited the museums adjacent to it that housed many of the treasures that were brought out after the tomb was located and opened.

The tomb museums were filled with treasures and propaganda. The propaganda was already all too familiar, such as endless quotes from Chairman Mao which of course everyone already knew from the little Red Book of Mao sayings that all Chinese were required to have. The treasures included two magnificent kingfisher feather headdresses inlaid with jewels that particularly intrigued me.

When asked for a translation of banners with Chinese writing, sometimes we got an answer, sometimes we didn’t. The big white characters on red background hung on the lofty wall of small moss-covered stones in front of the Ming tower at the tombs prompted me to try one more time. “It calls for the support of the North Vietnamese,” came my reply. I was to later ask about the larger orderly red graffiti painted on the beautiful carved
Chu-yung Barrier Gate we passed on our route to the section of the Great Wall on our way to visit. “It says this was built in 1343,” was the answer this time. I very much doubt if 1343 had anything to do with that recent graffiti!”

On this part of the journey we rode beside railroad track that was particularly well tended and armed guards were stationed at switch points. Our guides explained that this was the route of the legendary Trans-Siberian Railroad. Just the mention of it brought a tremendous thrill to all. However, he told us it only ran one day a week and we would not be seeing the famed train.

Suddenly we took a hairpin turn on the narrow climbing road, and far off in the distance I spotted the shiniest green train in China. “Today must be the day!” I shouted optimistically running to the back of the bus where I’d left my camera case. And it was. For at least five minutes we rode beside the world’s most famous train, adorned with red medallions on alternate cars, as it wound through the hills of north China on its journey to Russia.

Only a very small section of the Great Wall had been restored at the time we were there. We’d seen pictures of President Richard Nixon on that short strip of wall three years before. We’d seen Henry Kissinger there. In fact, any photo of anyone on the Wall was taken there. So we knew what to expect. But we weren’t prepared for the emotional excitement of actually walking on the Great Wall of China. 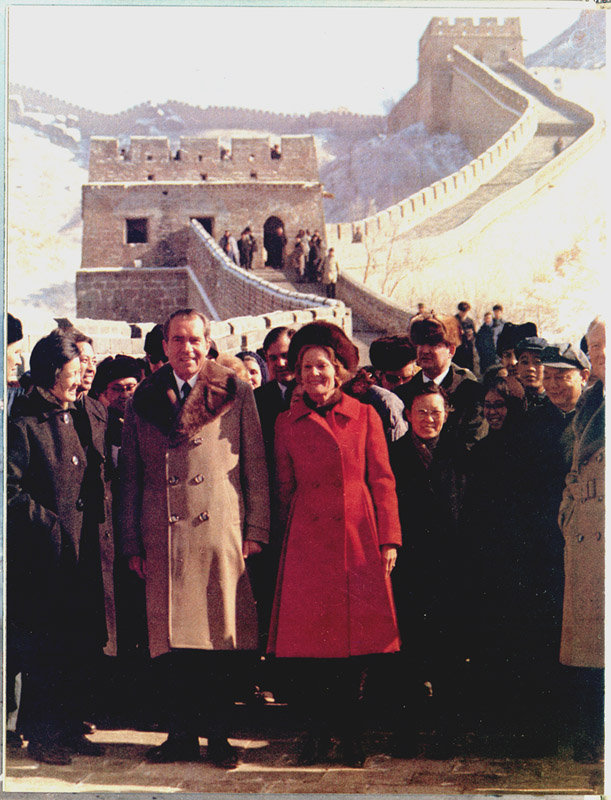 Everyone climbed the steep incline of the Wall at their own pace. Two-thirds of the way up I stopped and stared out over the mountains and plains of China, and the length of the Great Wall that was within our sight. It would be difficult for people only familiar with today’s photos and films of the Great Wall of China, with thousands of tourists from all over the world, vendors hawking Coca Cola and tee shirts, graffiti, to grasp the emotion of being there in February 1975. I was in China, walking on the Great Wall. Tears started to blur my vision. So I sat down to allow the emotion of the moment to subside.

He was in my lap before I was aware of his presence — a tiny toddler in bulky quilted clothes protecting him against the intense cold winds blowing off the Gobi Desert so close to us in that location. A dear little boy who didn’t yet know about strangers and East and West and cultural revolutions and distrust. Even his parents watched fascinated from a short distance, for a few moments not thinking of possible consequences from those who were always watching them as well as us since the average Chinese citizens were not supposed to have any contact with Westerners.